The Nymphea Perfume Bottle—A Project from 18 Years Ago 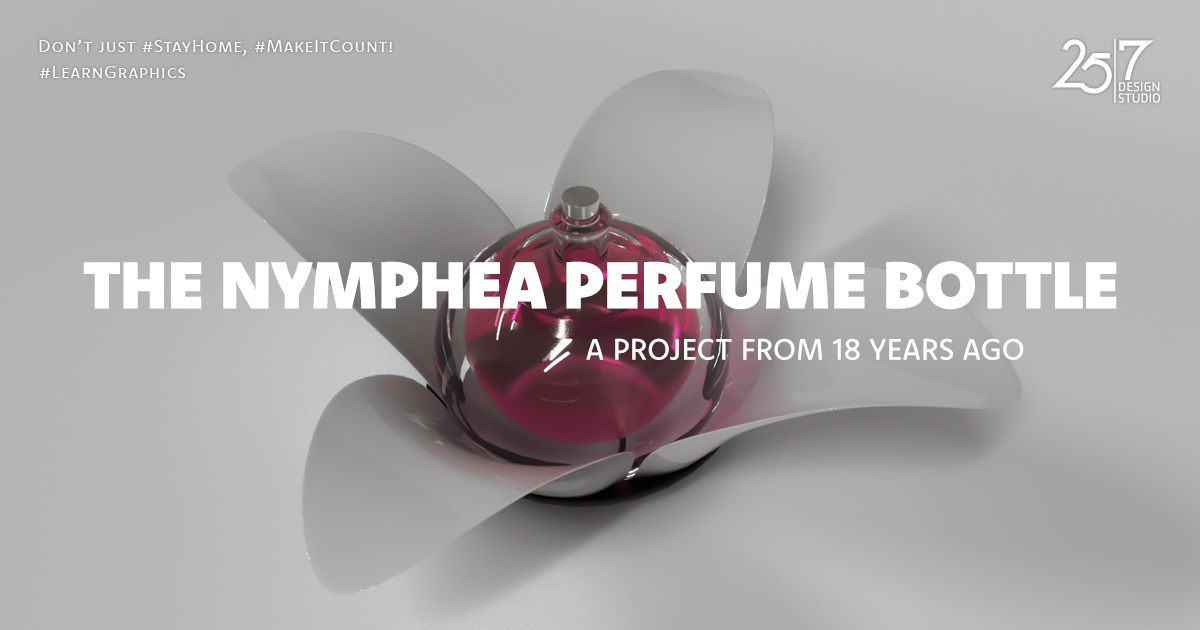 In the early 2000’s, I was fortunate enough to work at Hungary’s largest game developer studio at the time, Philos Labs. This is where my 3D career had begun, first modelling with LightWave (taking makeshift lessons from a colleague in the evenings, paid for with beer). When the studio decided to switch to Maya, I was granted a comprehensive course at Leonardo Sns, which later became the first place I taught Maya at.

At the studio the sudden growth, the shifting environment, and the troubled relationship with publishers resulted in a massive crunch, (although I don’t think anyone called it that way, back then). So when someone asked me if I would take two months off to help someone with a product design project, I didn’t think twice.

Luck Be A Lady

The project came from a young and talented Munich-based designer who was working on a complicated marketing campaign introducing a fictional brand, Nymphea. If memory serves me well, this was part of his final year at university, so the stakes were high enough to hire a 3D artist to produce additional imagery. That artist happened to be myself, having absolutely no idea that getting out of the frying pan, I jumped straight into the fire taking the job. Having completed my Maya training less than a year prior to this, I lacked the necessary experience, know-how, and at least half of the skills that proved to be necessary to complete the project. So I learned on the go, masquarading my trial-and-error processes as professional approach, spending most nights reading forums, figuring out how to survive the next day, doing my best to look like someone who knows what he’s doing.

Luckily, the combination of dangerous levels of adrenaline and the dread of losing face like never before paid off, and I completed the project on time; the perfume bottle design turned out to be quite nice, the dead faun floating on water surrounded by waterlillies (the main theme of the campaign, from which the bottle design originated from) looked acceptable, with a lot of photoshop-tinkering in post production, of course (and that I did not even have to do myself).

After the project, I went back to Philos, having replaced one crunch fatigue with another, but knowing my limits much better (and Maya, too, at least a little bit). Since the project’s entirety belonged to the original designer, I have nothing left to look at (and that’s probably a good thing). I once repeated the building of the model, I think in 2008, teaching NURBS modelling in the Mesharray School in Budapest, and did a few renders, but haven’t really thought about it ever since. Not until last weekend.

I recently had an idea, or to be precise, two ideas, about how to create more interaction for 25/7, so I created a Discord server, and decided to try livestreaming on Twitch. The Discord server is still being set up, but if you feel like it, feel free to join by following this link. The upcoming streams are advertised there, and you can meet and chat with old and new students, and mentees of 25/7. And me, of course, if that’s what you get your kicks out of.

The idea about streaming on Twitch was obviously inspired by Pixologic’s ZBrush-related streams, because contrary to popular belief, I don’t watch Eurotruck Simulator 2 streams exclusively, I tend to watch other stuff, too. I didn’t want to start with 4–5 hour-long sessions, though, so I went looking for a short project, so I could look at the chat once in a while, and answer questions while working. And then I remembered the Nymphea perfume bottle. This is not an accurate rework of the original, mind you, it’s dramatically simplified, but the goal wasn’t the completion of a high-end image, it was rather trying out the platform and how this whole thing works.

I had fun, enough to want to continue, so if you feel like it,  join next time it happens. The schedule is posted on the channel’s page, in a calendar module (and also on the Discord server). Feel free to add your suggestion, too, and if you missed the stream, no worries, I’m going to post all of them on the 25/7 YouTube channel.

The modelling techniques I used during the stream can be learned by taking our Modelling and UV Mapping course, which is now available with some very serious discounts. Go check it out. And if you have any questions, as always, shoot.